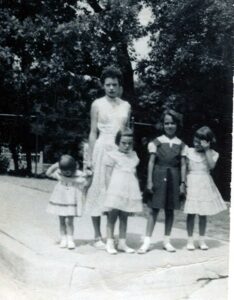 I am a product of Oak Cliff, Texas, a fact I state proudly. Born at Methodist Hospital, which now has a different look, my first several years were spent in Cockrell Hill. That was long before I knew about Sarah Cockrell and how she helped early Dallas.

My world was very small for most of my formative years. We moved just to the outskirts of Cockrell Hill when I began school, attending L.O. Donald Elementary. It was just a typical school, with open windows and doors and nature was our air conditioning. The playground was nothing special, but we all loved the tether ball and jungle gym. Girls never wore anything but dresses to school, but outdoor play required pants to be worn under them. Modesty was a virtue. Shoes were, for the most part, saddle oxfords, which were foam-polished when needed.. A highlight, for the girls anyway, was square dance lessons. The boys, whom we likely referred to as 'rat finks' because we were sure they had cooties, reluctantly accepted the challenge of doing an alaman left, but, in the end, I think enjoyed the dance as well.

We had no car, and I’ll resist the story that we walked a mile to school in the snow, but yes, we walked to school, no matter the weather. If we needed to go where legs wouldn’t take us, we would ride the bus. Sometimes, we had to take a paper transfer from the driver, in order to reach our destination, but we rarely left Oak Cliff. In fact, I distinctly remember my Mother telling us, “There is no reason to go to the other side of the Trinity River.” We took the Dallas Times Herald newspaper. It was known as the paper for “our side of town.” We had paper boys who rode their bikes and we knew all their names and where they would throw our paper. Our mail was delivered by a mailman (never a woman) who would walk to the door and put the mail in a metal box by the door.

We never had central heat or air and only when I became a teenager did we have a fan and it was a swamp fan. All during the day and night, we would have to take turns going outside, turn on the water hose, and wet the panels of the fan, if we wanted cool air. Summer nights, we slept on pallets in front of the fan and winter nights, four of us girls slept in one bed, topped with two quilts.

A good day for me and my gal pals was to pack a sack lunch and hike in the Chalk Hill Escarpment. We never gave thought to the dangers of reptiles or human snakes!

We lived about four or five blocks from Weiss Park. It never occurred to me that it was named for a man named Martin Weiss, a Hungarian immigrant who came to this Country and made significant Civic and philanthropic contributions to the City of Dallas. For us, it was our playground and our refuge. The summer would find us walking barefoot to the park, popping tar bubbles along the way. The park boasted a nice pool and a community center. The former required mass purchases of milk duds and sugar babies for hungry swimmers. The community center offered all kinds of activities for young boys and girls. In 1959, it afforded two special memories for me. First, it was the site of our Seventh Grade Graduation party, a bittersweet ending to the childhood we so loved. 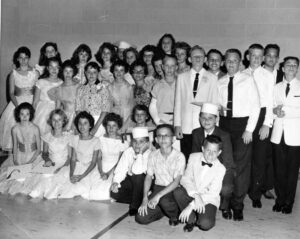 Secondly, it allowed me to tap my inner-thespian. A competition was held among city parks. Each would put on a play and compete against one another. In the end, I was awarded Best Actress. Our play was called “A Spacesuit of Roses.” I remember nothing about it, but I still brag….because I can.

There were several Churches in Oak Cliff but we attended Cockrell Hill Missionary Baptist Church. It was about six blocks from the house and we went there out of convenience. I mean no irreverence. We were Baptists (or so we were told), it was there, and we went. I was immersed there, so it has a certain importance to me. We had Training Union and Vacation Bible School. That’s what kids remember. I also remember that, at the end of Church, all the men congregated on the front steps and smoked their cigarettes. That didn’t seem religious to me at the time, but I was just a kid, just trying to reconcile religion and smoking.

A mile from our house was the Westmoreland-Heights Shopping Center.

It filled every need a family could have. When the school year began, we bought our school supplies at Page Drug Store or Skillern’s Drugs, a little farther North on Westmoreland, at Clarendon. If we spent $5.00, we got a free milk shake.

We called it “The Heights.” It had a theatre by the same name. Oh, it was glorious. It was cool and that was always a draw. The snack bar had all the usual elements needed for cavities and on top of the counter was a huge jar of dill pickles. My best friend, Sharon, always got the pickle. I got the cavities.

I saw “The Blob” there. I was scared out of my wits. The movie house also had a cry room. Couples would try to go in there for stolen kisses, but would get asked to leave so crying babies would have a place to yell. There were also dances there. Really, it was the bomb!

We would also walk to Cockrell Hill. Back then (old person vernacular), there were several places of interest. Gilley’s Pharmacy was a cornucopia of everything and more.

There was a little diner with tabletop jukeboxes, always a hit with young teens, a drive-in burger joint called The Bronco, where, and listen closely, we got 10 hamburgers for $1.00. There was also the Hill Theatre, which was owned by Gene Autry, yes, the very one. I barely remember it and later, it became a skate rink, and then, I believe, a hardware store. Another skate rink in the vicinity was The Rocket. It was grand, with the disco ball and all. I can still hear the announcer say, “All skate.”

We had two drive-in theatres we frequented, the Jefferson and the Chalk Hill. “It has been said that teens used to pile into the trunk of the car so that only the driver had to pay to enter. “

Junior High School, this before they were called Middle School, was L.V. Stockard. These years were the best and helped transition us from kids to young adults. I was fortunate enough to be in the Drill Team and also had amazing teachers. A notable distinction of that school is that Stevie and Jimmie Vaughn attended. They were younger so I didn’t know them, but I do throw out their names when I am trying to impress.

We began to branch out, geographically speaking. We would patronize Aunt Stelle’s, play miniature golf at Shadybrook in Cockrell Hill, take the bus “down on Jefferson,” to visit Sears, Red Bryans, McCrory’s, the Army/Navy Store, and other notable places.

On occasion, we would bowl at Bronco on Ft. Worth Avenue. It had been built where Mustang Village had previously been. We lived there for about a year when I was around ten, so I was always intrigued that I bowled on the land on which I had previously lived.

Other hot spots were the Texas Theatre on Jefferson, and the Wynnewood Theatre in Wynnewood Village. The latter was a robust shopping center that offered a wonderful array of shopping opportunities.

On the most special of occasions, we would go to Lake Cliff Park. It would involve the obligatory trip across the street to the Polar Bear, after photos were taken at the beautiful park, which I now know was once an amazing complex of pools, skate rinks, and theatres.

The biggest treat of all was taking to the bus to the State Fair of Texas. We would be given $5. We had a free ticket from school, so the $5 was all ours for spending money. We would meet at Big Tex, just like everyone does now, but quickly we would run to the Midway, where we would ride the Wild Mouse, try to peak in the Side Shows, get treats at the Women’s Building, and watch the Hootchie girls at the Cotton Club Revue, as they wiggled to the song, Green Onions. We would stay until almost dark, returning home via the bus and with money to spare.

Looking back, and I do that a lot now, those were the best of times. Little did I know about the rich history of the Community or the people who were instrumental in creating it, but I now have a great appreciation for all of them. ~A girl from Oak Cliff, aka 'an Oak Cliff girl'

23 thoughts on “An Oak Cliff Girl”