Profile of a Dallas Businessman 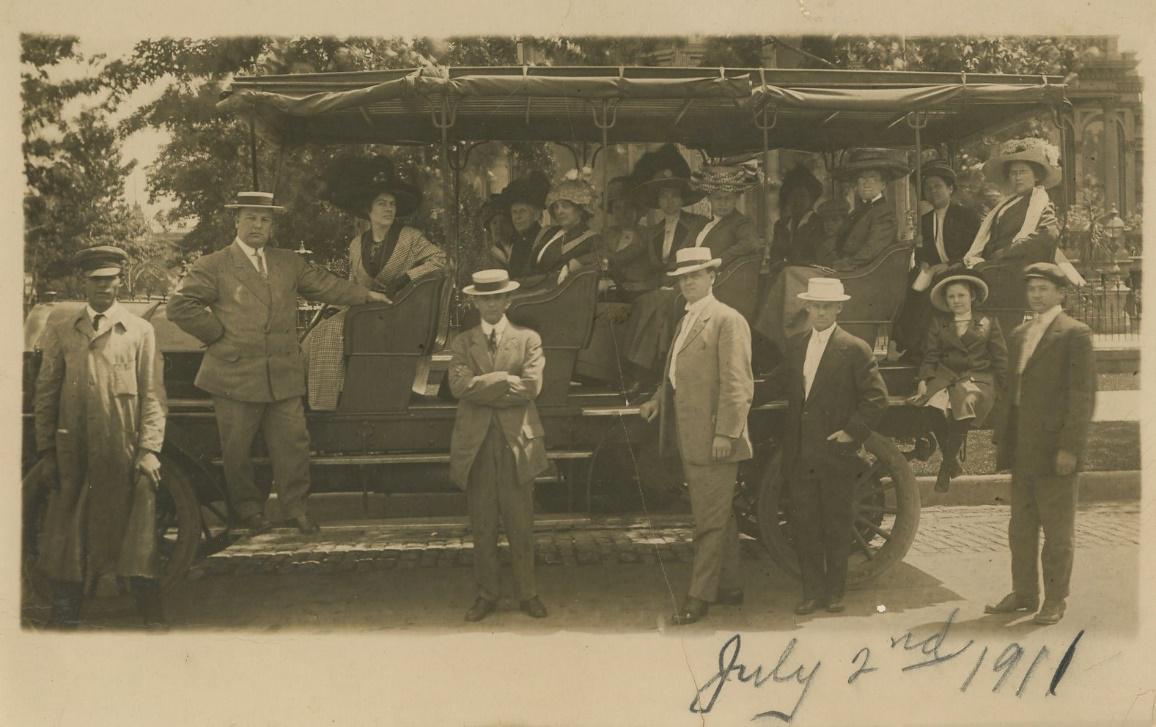 His great, great grandfather’s nephew was Robert H. Cumby, 1825-1881, a Civil War hero. Cumby, Tx. was named after Robert Cumby but his remains are buried in Sulphur Springs. The original headstone is still at the entrance to the cemetery in Cumby, Texas. The Cumby family moved from Virginia to Arkansas, Louisiana and finally to Texas sometime between 1870 and 1885.

James was the son of John Major Cumby and Emma Lamira McClimons. 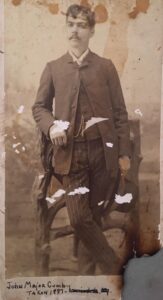 They had James in 1894 and by 1900 Emma, John and James had moved to Waxahachie, Texas on Franklin St. 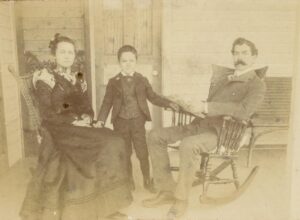 It may be that Emma and John were not living together by 1910 as records show Emma and her son, James, or Jamie as he was called, living in Dallas at 2101 Live Oak where Emma ran a boarding house. They were apparently living alone except for boarders.

Emma married John Francis Wyatt, 14 years her senior, on Aug 5, 1911, in Eureka Springs, Arkansas although no divorce records dissolving the marriage of 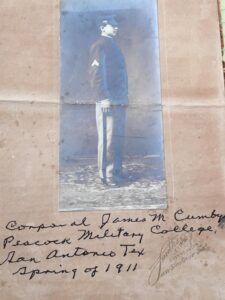 John Cumby and Emma have been located as yet. That same year, 16 year old James Millard Cumby was sent to school at Peacock Military College in San Antonio.

John Major Cumby died in 1913 and John Wyatt was appointed by the county court of Ellis County to be the custodian of young James’ inheritance which amounted to $6,000 – a considerable sum in 1913. This was the same year James’ half sister, Frances Evelyn Wyatt was born to Emma and Wyatt.

James Millard Cumby in 1913 where he lived on Kaufman St. in Waxahachie, Tx.

Emma and John Wyatt lived in Waxahachie until Wyatt’s death in 1932. Emma married a third time to Daniel Ouzts and they moved to Greenwood, South Carolina until his death in 1946 after which she returned to Waxahachie.

The Hammond family was so influential that Anna was extended an invitation by President and Mrs. Wilson to a reception while she was away at school in Washington, D.C. and living at 3100 R Street. 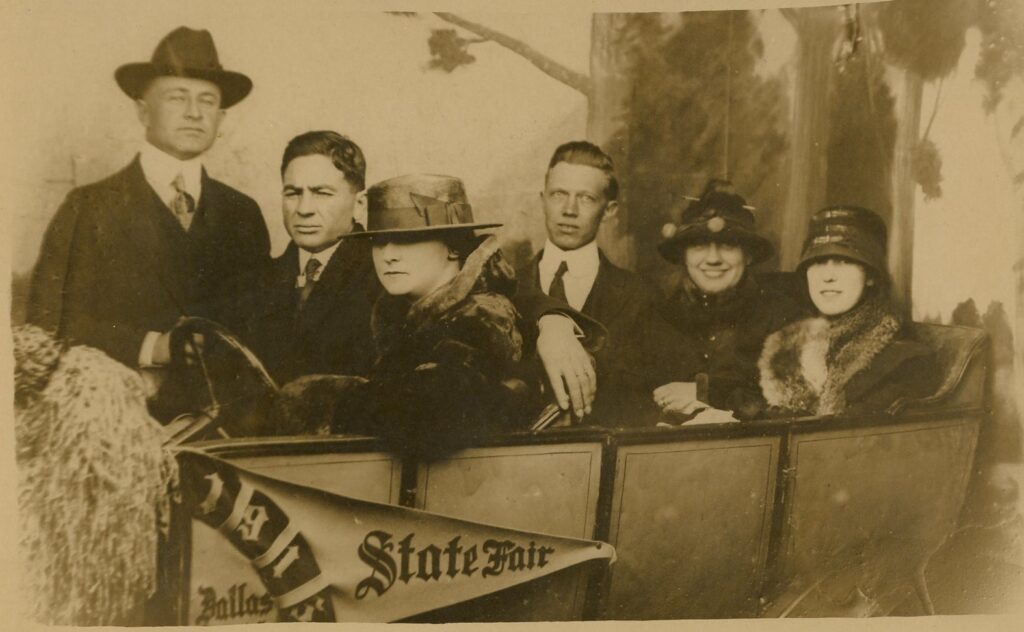 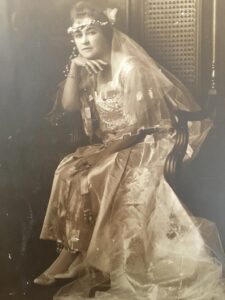 In 1917, with The Great War in progress, James had served one year as a First Lieutenant with the Texas Infantry. He was working as a “concentrator and shipper of produce” when he received his draft card May 28. 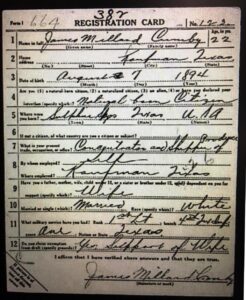 With the war nearing an end and a pregnant wife at home, James did not serve overseas in the campaign but was stationed in Louisville, Kentucky for training. He served as Lt. Field Artillery.

Their first son, James Millard Cumby, Jr., was born in January of 1918.

In 1920, the Cumbys were living in Dallas at 1014 N. Zang in Oak Cliff. James Sr. worked as a bookeeper for the Electric Light Company of Dallas. They were renting a home at 402 Montreal St. by the time they welcomed their second son, John Hammond Cumby, in October of 1920.

While James Cumby was honing his career and his work became more lucrative, Anna was at home raising the children. They enjoyed travel together often visiting National parks and famous landmarks. James had a brilliant, shrewd mind and a boundless curiosity and he often dabbled in photography, geology, mechanics, archeology, natural history and other disciplines that piqued his interest.

James was a motorcycle enthusiast and rode a Harley Davidson. According to family members he was instrumental in developing one of the first panoramic photos. Looking closely, he can be found both at the far left end and at the far right end in the same photo. Notice the Davis Millinery Co of Dallas which made the Davis hats. They can still be found from time to time in antique stores. 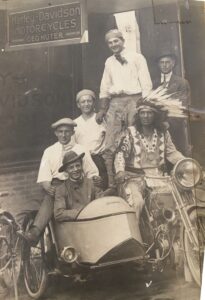 In 1924, Cumby was working at the Republic National Bank as an assistant Cashier and by 1927, at the age of 32, he had been promoted to Asst. Vice President of RNB.

The Republic National Bank was known as the Guaranty Bank & Trust in 1920 so Cumby started out on the ground floor right along with the new bank. He was looked on with favor by his father in law, F.M. Hammond.

The 1930’s brought more prosperity for the Cumby family. James enjoyed another promotion in 1931 to full Vice President. He joined the country club, took flying lessons in 1932, and became an Executive Board Member of Circle Ten Council of the BSA in 1937. The Cumbys built their home at 4200 Windsor in University 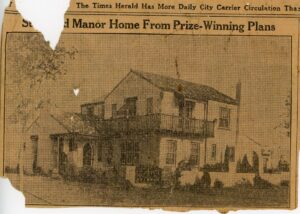 Park where they lived as of 1930 or before. A writeup in the Dallas Times Herald describes it as an architectural marvel. 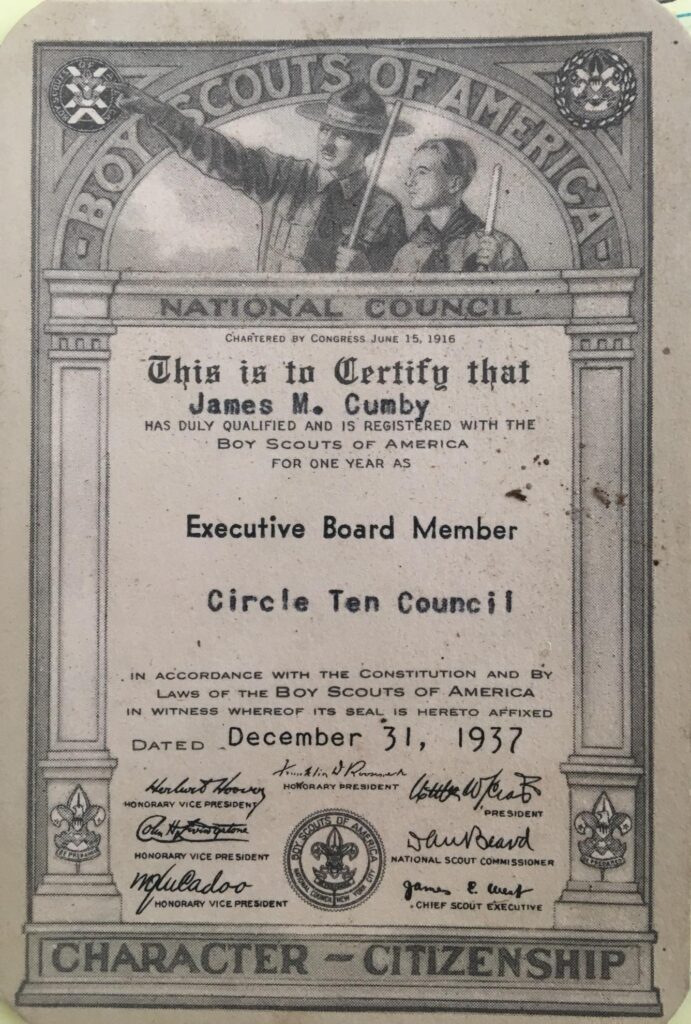 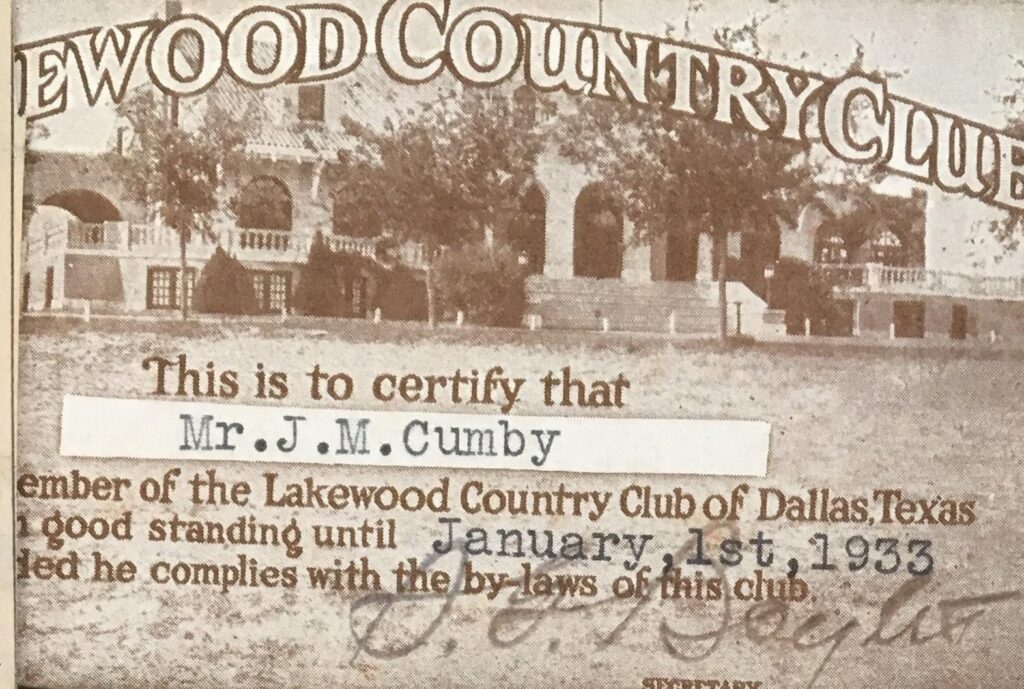 The 1940’s brought WWII but also great wealth to James Cumby. Everyone did their part. James Cumby, Sr. served as Major Commanding Officer of the 35th Battalion of the Texas State Guard. James Jr. and John had grown up as well. John on left. 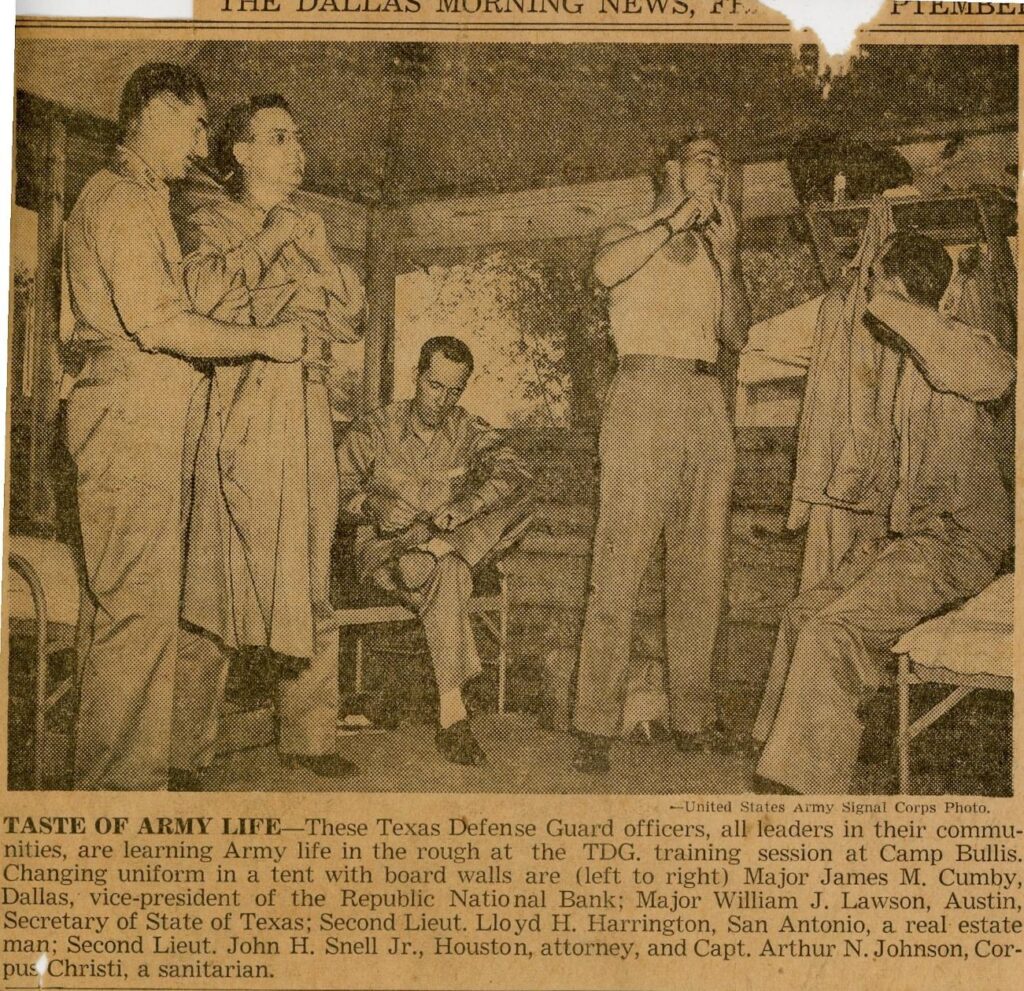 John Hammond Cumby, James’s youngest son, joined the military and is seen at age 21 pictured in front of the Windsor house in University Park in 1941. 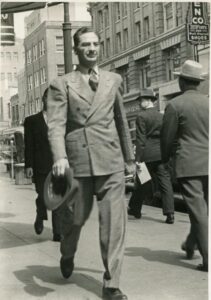 the Retirement Committee of the Republic National Bank Employee Retirement Fund and the Profit Sharing Trust Committee of the Savings and Profit Sharing Fund of the Republic National Bank Employees. He was on the Board of Directors of the Oak Cliff Bank and Trust Company and Liberty State Bank. Cumby was active in civic affairs. He was a member of the Dallas Country Club and became Director of Goodwill Industries. He was recognized as an influential force in the banking industry and was often quoted in the newspapers.

These decades continued to see James Cumby as a prominent figure in the Dallas community and the banking industry. He was a deaconate of the Highland Park Presbyterian Church, a member of the Little Sandy Club, the Texas Game Fishing Club, the City Club, Lakewood Country Club, and director and president of the Dallas Knife and Fork Club. He was elevated to Senior Vice President of RNB in 1952. James also served on the Board of Directors of the National City Bank of Dallas, the First National Bank of Garland, the First National Bank of Honey Grove, Tx., and Dallas Title and Guaranty Company. Cumby was on the National Board of Directors of Goodwill Industries in Washington, D.C. in 1960. In 1961 he was appointed as the Chairman of the Executive Committee at RNB and in 1962 he was elected Vice Chairman of the Board of Directors there. He was the Director and Treasure of the Dallas Zoological Society, Director of the Caruth Memorial Rehabilitation Center, and Director of the Community Chest Trust Fund. Cumby made many investments during this time in real estate, oil and gas and other ventures. He was the Chairman of the Board and Chief executive officer of Wallace Investments, Inc. 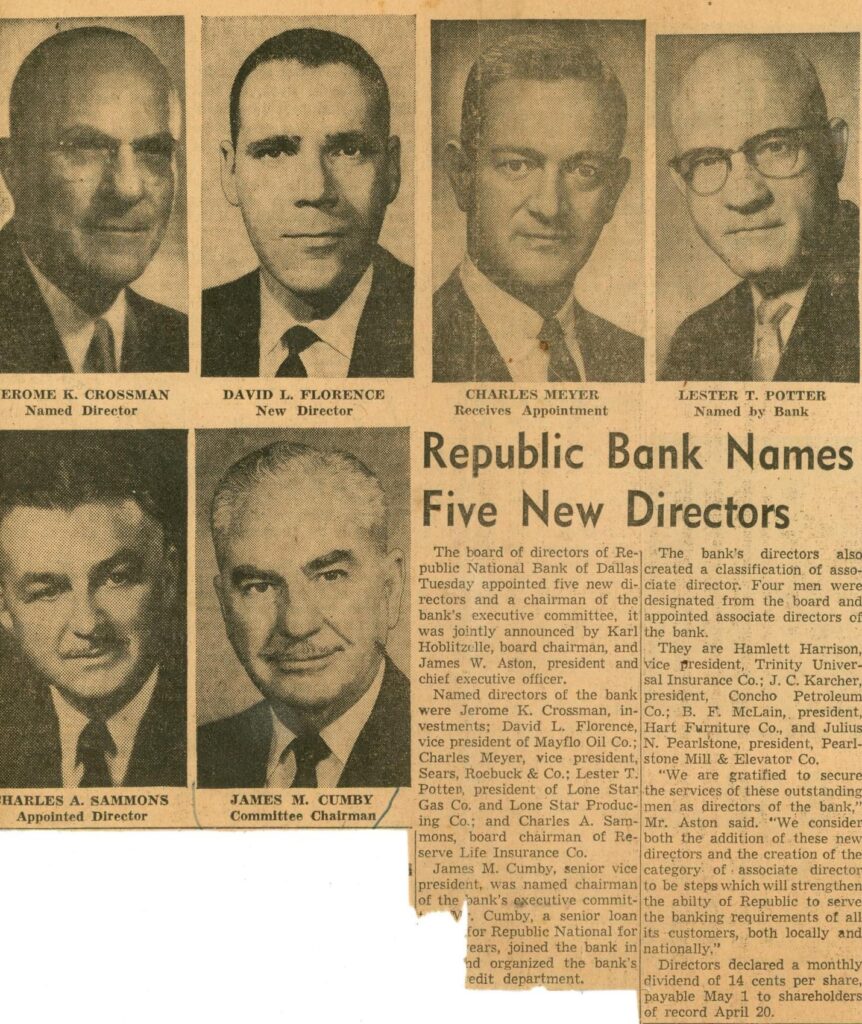 Cumby was also a member of the Audubon Society, both the Oklahoma and Texas Anthropological Societies, and the Texas Ornithological Society.

As Dallas grew farther North, Anna and James eventually sold the house on Windsor Parkway and moved to a house on the corner of Valley View and Hillcrest. That house was demolished to make room for LBJ freeway and in 1963 they moved to 4947 Brookview north of Inwood and Northwest Hwy.

As Dallas grew farther North, Anna and James eventually sold the house on Windsor Parkway and moved to a house on the corner of Valley View and Hillcrest. That house was demolished to make room for LBJ freeway and in 1963 they moved to 4947 Brookview north of Inwood and Northwest Hwy.

Anna Mays Hammond passed away in February of 1979. James Millard Cumby married Mariam C. Moore in November of that same year. They remained married until her death in 1988. Younger son, John, had been married to Katherine Furneaux, the daughter of a wealthy real estate family in Carrollton, Tx. She passed away in 1975 leaving behind their 3 children – a son and 2 daughters. John remarried shortly afterwards to Mae Etta “Darlin” Herrington. John lived in Montalba, Tx. north of Palestine from the 70 ‘s until his death in 2012. After the death of James’s second wife, Mariam, John brought his father to live with him in Montalba.

James Millard Cumby died in Palestine, Tx. on August 30, 1989 at the age of 95. He is interred at Sparkman Hillcrest Cemetery. His oldest son, James Jr., passed away just 9 years later in 1998. His younger son, John, died in 2012. James still has grandchildren living in Colorado and great grandchildren in Dallas.

You can add comments at the bottom of this page. For updates and our newsletter, be sure to add your email in this Newsletter Link

Our new sister page is dedicated to Football in the great state of Texas, from pee-wee to the pros. And Cheerleaders!

Interviews, transcriptions, domains, webpages, SSL's and so many other things to produce this interview, cost money. If you can donate a few dollars a month to help and keep these articles coming, Click Here! We are a fully approved 501c3 Non Profit. Let your CPA know you helped out!