Jack was the drummer for the bands Stycks, Texas Rose and Lynx

Paul: Welcome Jack, can you tell me how you got into the music business?

Jack: I went to school at RL Turner, played in a band there we called the Royals. That's where I began my drumming career.

Paul: Tell me about The Stycks

Jack: They formed a couple of years before I joined them, 66-67ish. I replaced their drummer Jay Taylor, his family owned Taylor Publishing.

That's about the time when I was introduced to the Studio Club which Larry Lavine owned. He's a crazy one. He married Caroll Shelby's daughter I think. We used to rehearse all the time at Studio Club. Larry was pretty cool about that. Don Henley would be there practicing with Felicity, we'd take turns rehearsing and listen to each other. It was pretty cool as nobody else was in the club.

I remember when Don and Glenn said they were going to go out to LA to play with some chick out there. Turned out to be Linda Ronstadt and the Stone Ponies which became the Eagles.

We played over at Louann's a few times before Larry bought it from Ann. We also ended up playing there every other weekend for a long time both in the old club and the new one that he built after the fire.

Paul: Can you tell me what the difference was between the owners Ann Bovis and Larry Lavine?

Jack: That would be hard to say as we didnt really have a lot of contact with Ann. We were booked through Showco. They got us some really good gigs. We opened for Zephyr at Louann's and we opened for Steve Miller band at McFarlin Auditorium at SMU. Zephyr actually played at the Texas International Pop Festival. Showco got us another gig opening for Sonny and Cher at University of Oklahoma and Texas Tech. They wanted us to sign an exclusive agreement but we didn't. Big mistake. 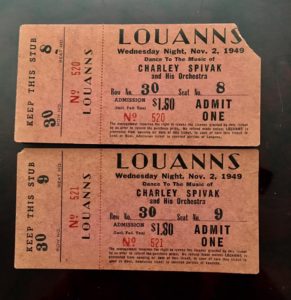 I was just thinking about those Louann's tickets we saw a photo of the other day. I remember going upstairs at Louann's and seeing box after box of old tickets from different shows going back to the 40s. I wish I had kept a few of those for souvenirs!

By the time we were playing there in the late 60's, they really didn't open the back garden up so much. So the bands would go back there to take a break, bring out the bongs and relax.

I do remember one little tidbit. We auditioned Stevie Ray Vaughn to join Stycks as a favor to Jimmy Vaughn. I could tell he was a natural but we really needed somebody that could play the cover tunes. He was really good but we needed guys that could fit in our style, he was still a little wild. Then a couple of year later we are playing The Cellar and this band called Blackbird comes on and all of a sudden here comes Stevie. Wow. What a change. The guy was an absolute phenom.

That was the week before this happened. We were up at Louann's during the day trying to work in the new guitar player that we had just hired and had left all our equipment up there. This was April 1st of 1971. I get a call from a friend of mine telling me that 'Louanns burned down last night'. I tell him 'that's not funny' thinking its a April Fools joke. Turns out it was true.

I called the Dallas Fire Department to make sure my friends hadn't been ribbing me. They told me that it was a 3 alarm fire. I asked what was the extent of the damage and he says 'the place burned to the ground'. I'm saying 'oh crap, you gotta be kidding me.'

I remember asking about the fella that lived upstairs. He was lucky to get out of there with his life. I think his name was Terry, an Assistant Manager or something.

From what I understand the Fire Department kinda gave up saving any of the buildings but were protecting the Texaco Station on the corner. They had gone into a defensive mode so the tanks there wouldn't explode.

We went by later once the fire had cooled off. My drums had melted into a little pile, I grabbed a couple of cymbals and that was about all that was left of all our equipment.

We had just been dropped by our insurance company two weeks before that saying that we were too big a risk, so we ended up losing everything.

Anyway we had a gig later that night so we headed over to Arnold and Morgan and get everything. I was still paying off the loan on the year old, double bass Ludwig, two flare toms and a ton of percussion equipment. Larry Morgan was there, we told him what had happened and he thought we were pulling his leg, an April Fools joke. When he finally realized we were serious, he hooked it into gear and got us all fixed up for the gig that night.

We talked to Larry Lavine about this later but his insurance didn't cover anything we owned. That didn't go over too well with us but to his credit he kept us working at the Studio Club and the new Louann's. The new club was the same building where Kitty Hawk was and later it became Cowboy and Confetti. I remember there were two levels. They had a balcony that kinda wrapped around the inside of the club.

Of course Larry was the brains behind Chili's. He and a few of his buddies would go down to Terlingua to the Texas Chili Cookoff. He tells me, 'Man, I got this idea for a burger place, we're gonna call it Chili's.' I'm thinking, 'just what we need, another burger place. But he knew.' We went to Opening Night there, it was kinda the rehearsal for the opening night.

Paul: So tell me about what happened to The Stycks

Jack: At some point we started losing members so we decided to go ahead and let the name Stycks die out. We ended up forming Texas Rose. Our lead singer was a guy named Bob Lincoln and we had a gal singer named Linda Wary. Her boyfriend was the fella at Studio Club that booked us. We went through three or four versions of Texas Rose.

I also played with a band called Lynx. It was kinda strange as we opened for the band Styx (not my Stycks)

Paul: So what are you up to these days?

Jack: Well up until about 5 years ago, I was electronics manager at Walmart. Then I decided to retire. I basically handed them my badge and walked off after the manager and I got into a fight.

Now my wife and I have 14 cats and 3 dogs. Spend half my day cleaning cat poop!

Paul: Thanks so much Jack. Some great stuff here, it's been a blast!

9 thoughts on “Jack Mitchell – The Stycks”